Insects near streams are taking in loads of pharmaceutical drugs and can pass the compounds on to predators higher in the food chain, such as frogs, birds and bats, according to a new study. "Predators that consume aquatic invertebrates in wastewater-influenced streams may be exposed to about one quarter and up to one half of a human dose of some pharmaceuticals," the authors wrote in the study, published today in Nature Communications. Pharmaceuticals are increasingly detected in waterways around the world as prescription drug use increases. The drugs get into the water via people excreting them or when they're flushed down the toilet. Wastewater treatment plants were not designed to handle such contamination and previous research shows only about half of drugs are removed by sewer treatments. The new study is the first to show that the pervasive pharmaceutical pollution in waters around the world can concentrate in bugs near streams and travel up the food chain—potentially exposing top predators to "therapeutically-relevant doses," Emma Rosi, an aquatic ecologist at Cary Institute of Ecosystem Studies and a co-author on the paper, told EHN.

The study has global implications, she added. "We've known for a while pharmaceuticals are found in streams in places like the Great Lakes and across the U.S.," Rosi said. "If they're getting into food webs in Australia, it shouldn't be any different here." "Undoubtedly represents an underestimate" 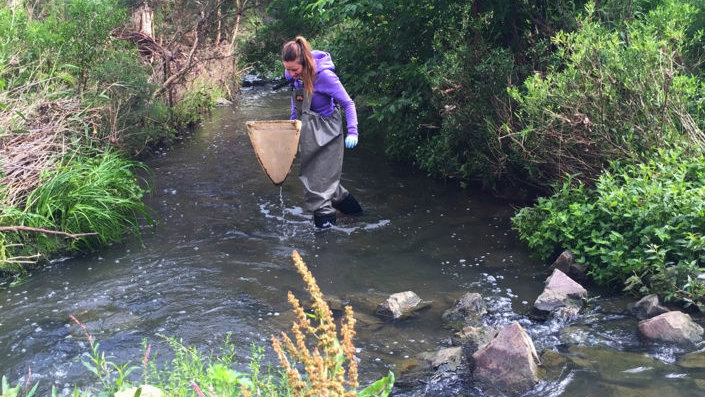 CRosi and colleagues tested six Melbourne, Australia, streams for 98 pharmaceuticals—including antibiotics, antidepressants and antihistamines—and found 69 of the drugs in aquatic insects and 66 in spiders. "If you go to doctor and tell them you're taking one drug they want to know if there are interactions within your body," Rosi said. "We found 69 different drugs in aquatic invertebrates." They found the highest levels in those tested downstream of wastewater treatment plants or highly populated areas—concentrations at these areas were 10 to 100 times higher than other sites. "Insect tissues had drug concentrations that were orders of magnitude higher than concentrations measured in surface waters," said co-author Jerker Fick, a chemist at Umeå University in Sweden, in a statement. "We also found a diverse suite of drugs in spiders, indicating that drugs are passed from the water to prey to predator, thereby exposing other animals in the food web to drugs." Rosi pointed out the riparian spiders build their webs right over streams, so the "only way they're getting drugs is when bugs emerge from streams as adults and are eaten by the spiders." The authors note that the screening "undoubtedly represents an underestimate of the diversity of compounds present in food webs because in the U.S. market, for example, there are [more than] 1,400 Food and Drug Administration approved pharmaceuticals." By looking at these concentrations, and knowing the feeding habits of predators that eat stream insects, the researchers also estimated the drug exposure of trout and platypus. Rosi stressed it's not entirely clear if trout and platypus—and animals further up the food chain like birds—would receive the full load of pharmaceuticals from eating the bugs, simply because we don't yet fully understand how much of the drugs are passed on when prey are consumed. However, the loads could be significant, according to their estimates. Platypus, for example, could be getting up to 50 percent of a human dose of antidepressants. This intake is "likely to have biological effects," Rosi added. "What does it mean to be a trout with more than 60 drugs in your tissues?" It's hard to say what the effects of these exposures might be. Previous studies have found that drugs in streams can disrupt the timing of insect emergence, and spiders' ability to spin webs. In fish, much depends on the drug, the mixture and the dose; however, mixes of pharmaceuticals have previously been shown to disrupt the endocrine system, feminized them, altered behavior and reproduction, changed growth, and increased liver sizes. There is less research for other wildlife such as birds, but a study earlier this year found male European starlings sang less to females that had been fed a diet of worms spiked with fluoxetine—known by the trade name Prozac—at concentrations found at wastewater treatment facilities. Singing is a crucial part of courtship and reproduction for birds and such changes in behavior could cause population level impacts. The researchers also note that pharmaceutical use is expected to continue increasing, especially as the world population rises. Though conducted in Australia, the study has implications for streams and wildlife everywhere. Many of the insects in the study—and all of the drugs—are found throughout the world. "What does it mean to be a platypus or trout with more than 60 drugs in your tissues? Are there synergistic effects?" Rosi said. "We really don't know."